EUNICE -- LSU Eunice will host a two-day event designed to expose students to career opportunities in esports and to develop a pipeline for students interested in the competitive gaming phenomenon that has become a two-billion-dollar global industry. Dr. Marc Williams, LSUE's Distinguished Visiting Scholar, has partnered with top esports executives and the NBA 2K League to create LSUE's first Esports Symposium and Esports Master Class.

APPLY TO BE A PART OF THE ESPORTS MASTER CLASS

"Dr. Williams is one of the leading educators in esports in the world, and we are thrilled he is using his resources and platform to provide access and career opportunities in esports for our LSUE students," said Dr. Nancee Sorenson, Chancellor of LSUE. "The global gaming industry is expected to grow from $137 billion to $300 billion by 2025. Esports is growing at a rate of 40 percent a year and expected to reach over $2 billion by 2021. This kind of growth creates demand for professionals with the right mix of education, experience, and passion for the industry. LSUE has the opportunity for our students to be among the most competitive professionals competing for these jobs in the near future. Esports is poised to have a huge impact on the sports, business, and media industries, so it is impossible for educators to ignore. LSUE is positioned to be one of the leading community colleges in the nation to explore the academic side of esports, and we are READY for the challenge." 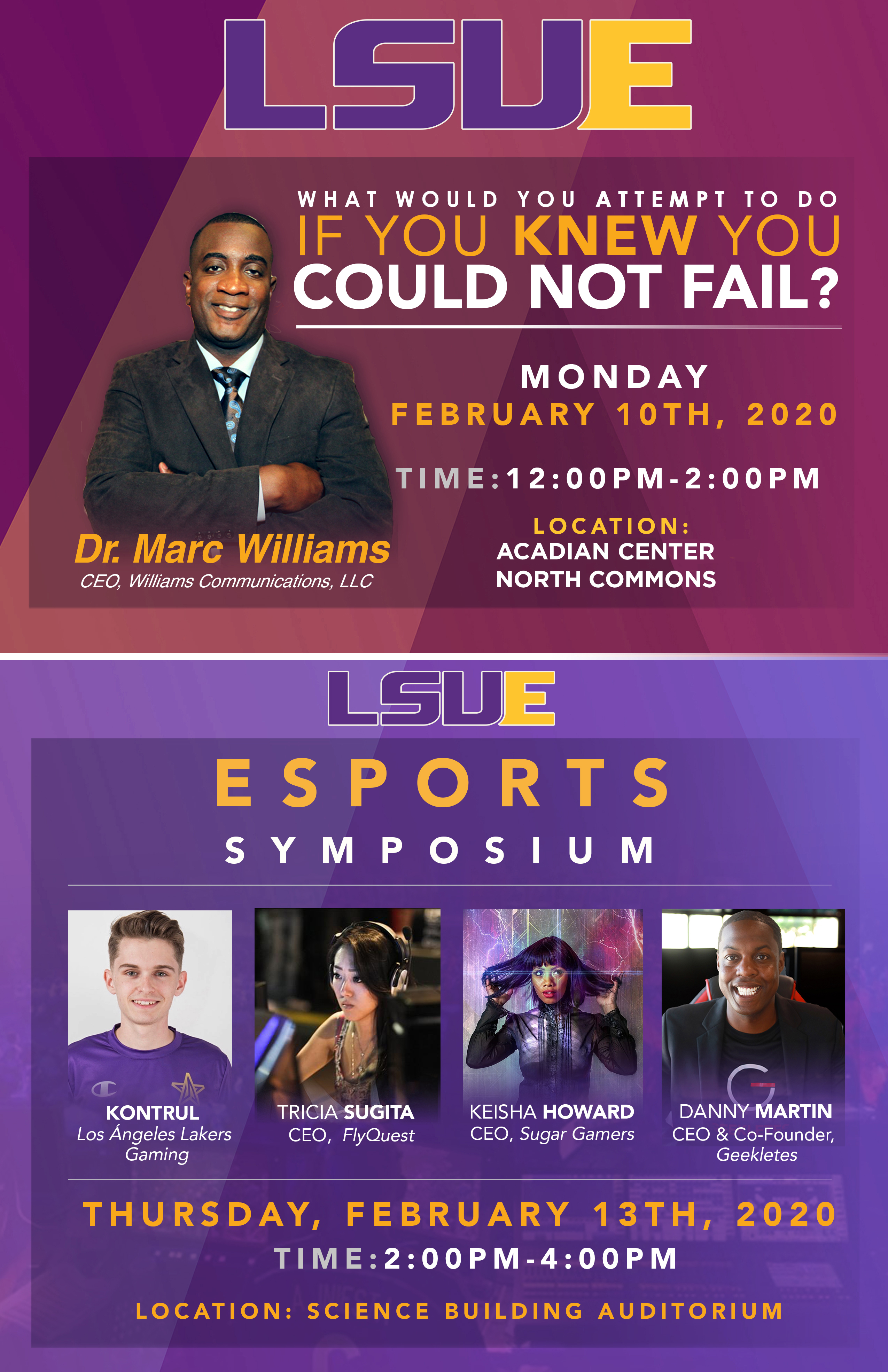 LSUE students can hear from Williams at a noon gathering in the Health Technology Auditorium on Monday, February 10.

The Esports Symposium will offer students a general introduction to esports and the video game industry, and will feature minority industry trailblazers, including Tricia Sugita, recently named CEO for FlyQuest; Keisha Howard, Founder of Sugar Gamers, one of the leading companies focusing on diversity in gaming and technology, and Danny Martin, CEO & Co-Founder of Geekletes. The two-hour event will be in the Science Building auditorium (room 112) on the LSUE campus. For a campus map, please visit lsue.edu/map.

The Esports Master Class will consist of a six-hour workshop that will focus on the history, ecosystem, trends, career paths, and cultural impact of the NBA 2K League.

"I am excited to partner with the NBA 2K League on such an innovative opportunity for LSUE students and bring seasoned senior-level esports executives, and excited LSUE will be the first community college on record to host an esports symposium and esports master class," said Williams, CEO of Williams Communications, LLC., and LSUE Distinguished Visiting Scholar.

APPLY TO BE A PART OF THE ESPORTS MASTER CLASS

Williams collaborated with the NBA 2K League to develop the esports master class, where students learn about the NBA 2K League. Students are divided into groups and given an NBA 2K case study to work through and develop a solution. They will present their findings, and the winning group will get to experience a 1-day visit to the NBA 2K League Headquarters in New York in April. This is the first time the NBA 2K League has offered such an experience to students at a community college.

"Additionally, I am thrilled to be part of seasoned senior executives from diverse backgrounds to discuss esports at LSUE. Community colleges can be uniquely positioned to be among the most competitive professionals competing for high demanding jobs in the gaming industry by introducing students to programs that are designed to educate them about the gaming industry," said Williams. "Even more exciting, the implementation of esports programs at community colleges like LSUE can also be an opportunity to increase enrollment."

The senior executives that Williams is bringing to the LSUE campus are Tricia Sugita, the new CEO of FlyQuest, Keisha Howard, a two-time TEDx speaker and founder of Sugar Games, Kontrul of Los Angeles Lakers Gaming, and Danny Martin, the CEO, and Founder of Geekletes.

As the recently appointed CEO of FlyQuest, Sugita knows first-hand the impact increasing various Tech pathways in higher education has on student empowerment.

"At FlyQuest, we believe that greatness already exists within everyone, and we want to help them find and showcase it," said Sugita. "As an organization, FlyQuest wants to equip students with the knowledge they need to achieve greatness, and I am very excited to be given this opportunity to speak to students at LSU Eunice who are looking for future opportunities in esports."

Sugita will be directly involved with the competitive aspect of the FlyQuest's League of Legends squad. She will oversee the company's brand new practice facility as well as facilitate the launch of two new initiatives. FlyQuest's new facility, called the Greenhouse, has over 7,000 square feet of dedicated space and houses practice rooms for both LCS and Academy teams, coaching/review rooms, content studios, and more.

As the recently appointed CEO of FlyQuest, Tricia Sugita knows first-hand the impact increasing various Tech pathways in higher education has on student empowerment: "At FlyQuest, we believe that greatness already exists within everyone, and we want to help them find and showcase it," said Tricia Sugita, CEO of FlyQuest. "As an organization, FlyQuest wants to equip students with the knowledge they need to achieve greatness, and I am very excited to be given this opportunity to speak to students at LSU Eunice who are looking for future opportunities in esports."

Howard started Sugar Gamers over ten years ago while pursuing a career in high-rise real estate development. Her journey has afforded her the opportunity to work with the latest in consumer technology, specifically augmented and virtual reality, as well as brands like SYFY, Watch mojo, AT&T, HBO, Nintendo, Microsoft, and Google.

Dr. Williams has worked for three of the largest sports brands in the world, including Champs Sports, Footaction, and Reebok. During his tenure at Champs Sports, he helped Champs Sports become a $1 billion brand and was voted by CNN as one of the "Top 20 Inspirational Speakers in The World". He is the co-founder of one of the first esports business degree specializations in the country at Saint Peter's University in New Jersey. His insights have been featured in several media outlets, including CBS Evening News, BBC, Billboard Magazine, and USA Today. He holds a Masters in Sports Management from the University of Massachusetts and a Doctorate in Education from West Virginia University.